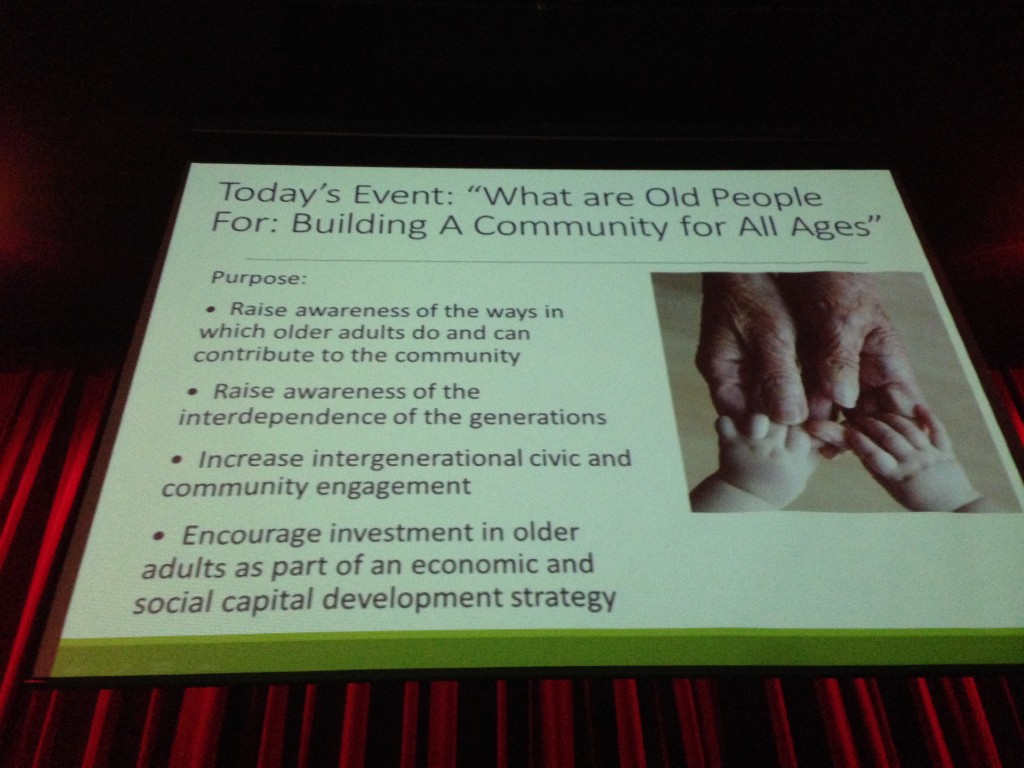 I was in Portland Tuesday, Sept. 23, 2014, with Dr. Bill Thomas for one of the most promising changing aging developments I’ve ever reported on — a year-long community engagement initiative sponsored by the city of Portland, Ore., called “What Are Old People For: Building a Community For All Ages (WAOPF).”For too long the narrative around aging has been dominated by negative and declinist viewpoints, especially from a political and policy viewpoint. But when the city of Portland convened a Task Force on Vital Aging they seized instead on the strengths, real opportunity and potential that comes with aging and became the first city in America to join the Age Friendly World initiative. 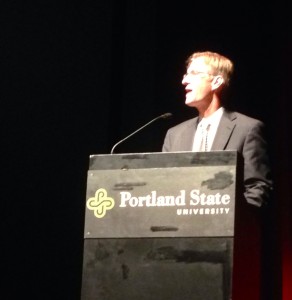 Oregon Treasurer Ted Wheeler“Portland is determined to capture the significant benefits that will result from building communities for all ages,” said Oregon State Treasurer Ted Wheeler in his introduction of keynote speaker Dr. Bill Thomas. Treasurer Wheeler was the original chair of the Task Force on Vital Aging.Last year the city adopted the Action Plan for an Age-Friendly Portland and WAOPF is one of the first concrete initiatives called for in the plan. Inspired by Dr. Thomas’s book of the same name, WAOPF is designed to stimulate an intergenerational dialogue and raise public awareness of the interconnectedness of the generations and the social and economic value of older adults as catalysts for transforming Portland into a community for all ages, said Jay Bloom, CEO of Bloom Anew and one of the architects of the initiative. 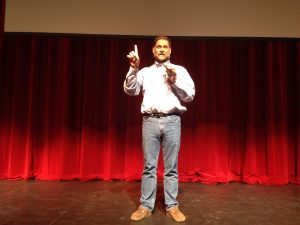 Dr. Bill ThomasTuesday’s event, sponsored by AARP Oregon, Elders in Action and Portland State University Institute on Aging, entertained and educated the audience on the progress of the Action Plan and opportunities to engage through the year-long WAOPF initiative. Speakers included U.S. Sen. Ron Wyden and Portland Mayor Charlie Hales, as well as numerous local aging advocates and experts, such as PSU Institute on Aging director Margaret Neal and Mindramp co-founder Roger Anunsen.In his keynote speech, Dr. Thomas said that Portland has become the model city for reimagining and reframing how we think about aging and community.“The great thing that Portland is endowed with is this powerful, visionary imagination — the ability to question the conventional wisdom that old age is a burden and to actually proclaim something very different — no, it’s a strength,’” Dr. Thomas said in his keynote.The event was broadcast via livestream video and is available to watch in full thanks to BrandLive.Dr. Thomas opened his remarks with a beautiful piece of stage craft that I happened to catch on my iPhone. Enjoy:Related PostsPortland Wants To Know What Are Old People For?Next week on September 23, Dr. Bill Thomas returns to Portland to help kick off a year-long Age-Friendly Portland community-initiative aptly titled after his book “What Are Old People For: Building a Community for All Ages.”Minka MAGIC Homes and CommunitiesNationally renowned aging expert Dr. Bill Thomas unveiled today the first-of-its-kind robotic prefabricated Minka house built on the University of Southern Indiana (USI) campus in less than a week featuring universal design accessibility and advanced manufacturing technology.Portland Promising Tiny Housing RevolutionMore than a decade ago, Portland began to encourage homeowners to build backyard cottages as a way to help alleviate a growing lack of affordable close-in housing. The city is now looking to dramatically increase tiny house development.Tweet14Share148Share6Email168 SharesTags: Portland WAOPF